Associate Professor in the Physics Department, College of Science and Mathematics 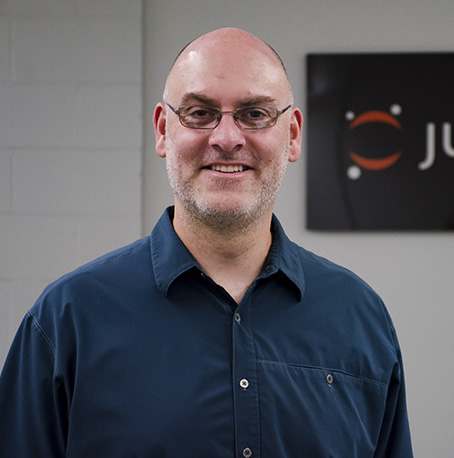 Dr. Brian Granger’s work to forge partnerships with several prestigious charitable foundations and corporations at the forefront of data science and artificial intelligence development has brought outstanding research and learning opportunities to the students and faculty at Cal Poly. His efforts will greatly affect the future of the Physics Department, the College of Science and Mathematics and the university.

Granger co-leads Project Jupyter, which develops open-source software, open-standards and services for interactive computing across dozens of programming languages. In 2018, Granger was able to leverage funding made possible by Bill and Linda Frost of the Frost Foundation to secure $2.3 million in investment for Project Jupyter from the Alfred P. Sloan Foundation and Schmidt Futures.

Granger was nominated for this honor by Dean Wendt, dean of the College of Science and Mathematics. “Brian Granger provides an excellent example of not only partnership, but of leadership in philanthropy,” said Wendt. “The philanthropic work Brian has done will have a lasting impact on our students, the emerging field of data science, and growth in the national and international reputation of our university.”

Professor in Wine and Viticulture Department, College of Agriculture, Food and Environmental Sciences 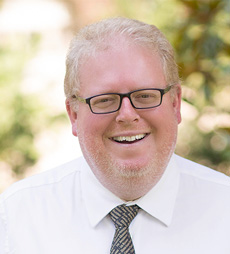 Dr. Benoit Lecat has been instrumental in illuminating the Wine Viticulture Department's vision for the future. Through his leadership, hard work and enthusiasm, Dr. Lecat has secured private support and established partnerships for the state-of-the-art Center for Wine and Viticulture. His efforts to obtain the funding needed to build this facility will enable students, faculty and staff across campus to prosper.

As a result of the partnerships with internal and external constituents, Dr. Lecat created a foundation of support and helped to contextualize the need for this multi-million dollar facility. He engaged alumni, parents and industry leaders in robust fundraising and helped to develop meaningful connections.

Dean Thulin attributes the department's growth to Dr. Lecat's efforts, “Under his guidance, Cal Poly is becoming the preeminent Wine and Viticulture department in the nation, training the next generation of wine makers, grape growers and operators.”

Professor in Chemistry and Biochemistry Department, College of Science and Mathematics

Through Ray’s efforts, the profile of the polymers and coatings program has been raised to national and international distinction, and has strengthened the program’s industry ties. He has worked tirelessly to expand his network of contacts in ways that benefit the WCTC, and has an outstanding track record of working effectively with both individuals and corporate donors. This has resulted in additional opportunities for students in research, internships and employment – with 100% student employment upon graduation.

“Ray Fernando provides an excellent example of not only partnership, but leadership in philanthropy”, said Phil Bailey, dean of the College of Science and Mathematics.

He worked with faculty, staff and Industrial Advisory Board members to create a strategic plan that included major laboratory developments, leading to the creation of the Advanced Communication Systems Laboratory. This new laboratory allows students to do research using present 4G wireless technologies and to help create next-generation 5G wireless communication systems. The laboratory was made possible through key relationships with the EE Industry Advisory Board. Cal Poly received $1.5 million in equipment from Keysight Technologies, and support from Anritsu helped outfit the lab.

Dr. Derickson fostered alumni engagement by launching regional receptions, soliciting the involvement of advisory board member firms, and establishing a reunion program for EE and computer engineering alumni. These activities led to the establishment of the EE Project fund to offset project costs for students in the department.

“His efforts have been marked by enthusiasm, optimism, commitment, inclusion, dedication and a spirit of collaboration and partnership,” said Debra Larson, dean of the College of Engineering.  Dr. Derickson earned a doctorate from UC Santa Barbara in 1992. He came to Cal Poly in 2005 and has served as department chair since 2010.

Dr. Jonathan York’s vision and leadership have been central to the success of Cal Poly’s Center for Innovation & Entrepreneurship (CIE). He co-founded CIE in 2010 with Professor Lou Tornatzky after a 30-year career as a CEO, entrepreneur and venture capitalist. He has built strong relationships with the San Luis Obispo community, alumni and entrepreneurial networks to support growing student demand for the CIE’s programs.

“Jon York has been instrumental in attracting leaders from across all business sectors to the Founders’ Circle, a group of seasoned entrepreneurs who actively support and engage with students,” said Provost Kathleen Enz Finken.

Under Dr. York’s guidance as faculty director, the CIE cultivated a continuum of resources for students of all disciplines, including pitch competitions; the Hatchery; the SLO HotHouse Accelerator; and Silicon Valley Entrepreneurs, a study-away program that partners with Draper University. On campus, he has ignited an entrepreneurial spirit among students and faculty by advising the Cal Poly Entrepreneurs Club and developing cross-disciplinary senior project opportunities between the College of Engineering and the Orfalea College
of Business.

Dr. York joined the Orfalea College of Business as an associate professor of entrepreneurship in 2010. He earned his bachelor’s degree at Yale University and his doctorate from Michigan State University.

The HVAC Program, the only one of its kind on the West Coast, had languished because of budget cuts and faculty attrition. In 2001, Dr. Maddren began to rebuild the program by engaging industry leaders to serve on an advisory board. He then championed a revitalization of the HVAC curriculum. Stabilization of the program and collaboration with Debra Larson, dean of the College of Engineering, led to the creation of the James L. Bartlett Professor in Mechanical Engineering. Dr. Maddren has fostered student success through internships, job placement and field trips.

He began in Cal Poly's Mechanical Engineering Department in 1999 as associate professor and was promoted to professor in 2007. He earned bachelor's, master's and doctorate degrees in mechanical engineering from UC Santa Barbara.

Wehner facilitated the development of the Oreggia Family Foundation, which has provided more than $5 million in direct cash gifts and more than $3.5 million in pledges to CAFES. He helped foster more than $1 million in donor sponsorships for the Center of Science and Mathematics.

He is credited with creating the CAFES Learn by Doing endowment in which 10 donors each pledged $100,000, generating $1 million to be used to match donations by others who would then have an endowment for the benefit of the college in their name. To date, more than 30 individuals have contributed.

And finally, Wehner was commended for developing key relationships with such leading organizations as the Leprino Co. and the California Strawberry Commission, both of which have made major gifts to the university.

Vakalis was singled out for his role in framing a new initiative in cybersecurity, which resulted in a $150,000 gift from Northrop Grumman to develop a state-of-the art cyber lab and collaborative cyber platform.

He was also praised for championing the university’s Big Data strategic initiative fundraising efforts that attracted $100,000 from alumni in 2013. Vakalis also helped raise more than $100,000 from alumni to develop and equip a cutting-edge Game Development Laboratory and led a $100,000 matching-gift campaign to develop and equip a Human-Computer Interaction (HCI) Laboratory, the most modern HCI lab in the San Luis Obispo area.

Cal Poly Provost and Executive Vice President for Academic Affairs, Kathleen Enz Finken has awarded the 2012 Provost’s Leadership Award for Partnership in Philanthropy to Dr. Allen C. Estes, head of the Architectural Engineering (ARCE) Department. Through his transformational leadership skills, and because of Estes excellent relationships with industry leaders, current ARCE parents, and strong ties to alumni, the Architectural Engineering community has benefited from his comprehensive fundraising efforts, despite the current economy and university’s budget cuts.

As visionary leaders in dairy science and technology, Drs. Golden and Tong believe Cal Poly is well positioned to make a significant impact on future generations of students, consumers and the dairy industry. Elevating their collaboration with both college-based and university advancement staff, they implemented a $20-million private-support capital program to expand the Dairy Science Department’s learning and applied dairy foods research facilities, invest in the newest generation of technologies which will bring new experts to campus, and fund higher level of collaboration with scientists around the globe. Both were critical in securing the lead transformational gift that launched the $20-million initiative. Their academic and philanthropic pursuits have resulted in an increased awareness and heightened respect, as well as millions of dollars in cash and equipment, for Cal Poly's Dairy Science Department and the Dairy Products Technology Center.

Cal Poly Provost Robert Koob has awarded the 2010 Provost’s Leadership Award for Partnership in Philanthropy to Phil Bailey, Dean of the College of Science and Mathematics.

Bailey’s unwavering vision and leadership drove the successful completion of the fundraising for the Center of Science and Mathematics, the largest public/private capital campaign in Cal Poly history. It took creativity, perseverance, and humor to overcome the many challenges, including difficult economic conditions, to make this happen.

Examples of the accomplishments that led to Bailey’s selection for the leadership award include:

Phil Bailey inspires his colleagues and leads by example in setting the highest standard of what a dean committed to advancement can accomplish. His academic and philanthropic pursuits have resulted in an increased awareness and heightened respect, as well as millions of dollars in cash and equipment, for Cal Poly’s College of Science and Mathematics.

Cal Poly Provost Robert Koob has awarded the 2009 Provost’s Leadership Award for Partnership in Philanthropy to Dr. Charles Burt, faculty member of the BioResource and Agricultural Engineering Department (BRAE) and Chair of the Irrigation and Training and Research Center (ITRC).

Burt was chosen from an impressive group of nominees for his leadership, hard work and enthusiasm in supporting Cal Poly’s mission by successfully advocating and securing private support for the BioResource and Agricultural Engineering Department.

Examples of Burt’s leadership and accomplishments that led to his selection include:

Charles Burt has inspired his colleagues and led by example in setting the highest standards as an engineer, educator and entrepreneur through the creation of the ITRC. He provides us all a wonderful example of what a faculty member committed to advancement can accomplish.

Cal Poly Provost William Durgin awarded the 2008 Provost’s Leadership Award for Partnership in Philanthropy to Graphic Communication Department Head Dr. Harvey Levenson. Since 1983, Dr. Levenson has been a true ambassador for Cal Poly, bringing recognition and honor, as well as donations of cash and equipment, to both the university and the Graphic Communication Department. He has built a solid program of national prominence, which resulted in the department’s accreditation by the Accreditation Council for Collegiate Graphic Communications in 2003. Cal Poly’s program is one of only a few graphic arts programs nationwide to receive accreditation by this group.

Examples of his leadership and accomplishments that led to his selection include the launching of a fundraising drive in celebration of the Graphic Communication Department’s 60th anniversary and the establishment of 23 separate endowments that the department presently holds. Recent donations include a new Heidelberg four-color press valued at $1.55 million, a Kodak computer-to-plate system, a Degrava press and Adobe CS4 and Data-Point file management software, exceeding $2 million. Through his tireless efforts and because of his excellent relationships with industry partners and his strong ties to alumni, the Graphic Communication Department has a history of robust fundraising, including gifts of money and state-of-the-art equipment.

Examples of his leadership and accomplishments that led to his selection include the development of an overall vision for future departmental funding opportunities, planned giving activity that resulted in major estate gifts and scholarship endowments, over $1 million donated by John and Gay Lau to name the Meat Processing Center and in-kind equipment solicited to create a state-of-the-art Animal Nutrition Center.